News Archive is where you see old animal of the month facts! 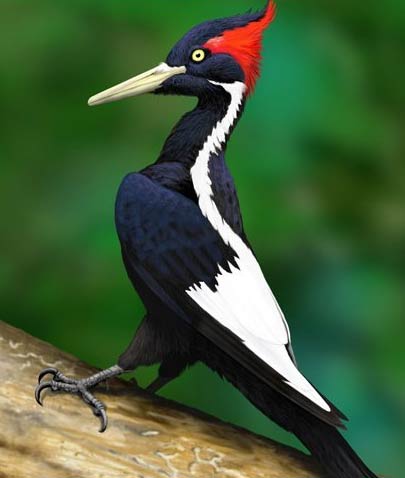 It is the month of ​November when the leaves fall and the cold drift starts coming in. Today the animal we are going to talk about may as well be extinct! It is very rare and hard to find. It is the #1 on the endangered animals list. It is........The Ivory-Billed Woodpecker!
This animal, well bird, was thought to be extinct. But someone from Arkansas videotaped an actual live Ivory-Billed Woodpecker. This caught the eyes of many and brought up hope for the birds. If you notice closely I said only one of these birds were recorded. Which means animal scientists haven't found a nest or flock of the Ivory-Billed Woodpeckers. Since they are so rare they only have a few facts about these poor guys!
This Woodpecker makes a distinctive sound called the double knock noise when pecking at trees. This will help scientists find any surviving Ivory-Billed Woodpeckers left in the wild. These woodpeckers are found in North America only. Their Diet is as carnivore and weigh between 16-20 oz.!!! Size: 18-20 in while Wingspan: 30-31 in. In the wild they can live up to 30 to 40 years. That is pretty old for an animal!
They are named after their ivory colored bill that isn't actually ivory even though it looks like it. It is bone! They are so endangered because they are killed for their ivory colored bills. Their bills were once decorative objects prized by the American Indian's and their tribe😞. This is why they are so rare because people try to take their bills and make something out of them. So let's just hope and hold hands that these beautiful birds don't go extinct.
Verreaux Sifaka Lemur
Happy Valentines Day everybody!! We are going to talk about the Verreaux's Sifaka Lemurs. They are known for there graceful hopping and feet covered in a minute. They are fascinating creatures read more to find out.
They are found in Madagascar in the dense rainforest. They have a black and white face and long tails. What is use of those long tails? When climbing trees and jumping from branch to branch it keeps them in balance so they won't fall. Their hind legs are really powerful which helps them keep upright. They have a lifespan of 18 years.They grow up to 18 inches when mature and the tail can be 24 inches long!!😯They weigh inly 7 to 9 pounds. Males are usually larger than males. They stay up in trees but if they walk on the ground it takes up a great deal of energy.
The Sifaka's are very territorial and strict when it comes to their habitat.
Feeding occurs in the morning and late afternoon. They will take a rest after because it is very hot in Madagascar. They enjoy leaves mostly but also eat berries, twigs, bark and fruit. The tend to eat food on the quality (like some humans do while shopping). When given plentiful of food they chose their favorite.
The dominant male is the only one that choses a mate. The females are not related to the male though. They chose on which male does the best grooming especially the time when it comes to babies. They come out in twins or single babies. They baby rides in the mothers pouch on the stomach fro 10 weeks. Then it transfers or the back. t will then when it is old of be able to roam around with the family. There are max 9-12 members in a pack.
They have predators like the fossa. They are very endangered. People keep them in captivity which is very terrible. So save them or donate money. If they are extinct it will be very sad. People won't know what a Verreaux Sifaka is. So support them!
Thanks for being with Kid Biz/me today! Have a wonderful Valentines Day!

Welcome Back! Happy New Year!                                                           To start a new year and learn about new animals is totally fun! But, today we will be learning about the Arctic Tern because it is my favorite animal and it will be interesting. They live up to 3-4 years and even one Arctic Tern has lived up to 34 years!!! Their wings are not that huge, their wingspan is in between 25-35 inches.
The Arctic Tern lives in the Arctic during summer months and migrate during the winter months. Each year at the end of August they fly all the way to Antarctica. They are circumpolar animals. In all they fly 24,000 miles. The arctic Tern survives the harsh region by staying in large groups called colonies. Eventually they come back to the Arctic or Tundra and they usually go back to its birth place or the same colony. In summer they have reddish oil in their eyes like sunglasses so, their eyes can be protected from the sun. That's the ways they adapt to weather during summer and winter.
Arctic Tern's mostly eat fish, insects, shrimp and krill. Their predators are mostly cats and other animals. 2 predators of the arctic tern are Inuit's (people who live in the Arctic) and Arctic Wolf. The breeding season is pretty normal but, if you are interested in it go to this website :http://en.wikipedia.org/wiki/Arctic_tern
you will learn more about Arctic Tern's on this website but also breeding season.
Some interesting facts are that Arctic Tern's live in daylight all year long!
Another interesting Fact is that arctic tern's will nest in June or July but ........ they do not build a nest! Also they Female simply lays her 2-3 eggs on the ground and both parents will incubate them, for about, 3 weeks. Arctic Tern's are the only birds who travel such a long distance! Thanks for joining me today! Bye! 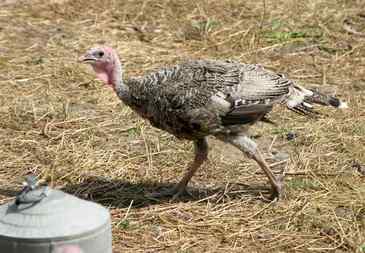 Baby Turkey walking arross the Field
Welcome back pals its nice to see you again! Today we will be learning about Turkeys since its November (2014).
Turkeys are omnivores and live up to 3-4 yrs. They eat insects, spiders, salamanders, beechnuts, blueberries and a bunch more.  As you can imagine what a Turkey looks like. But, I hope you know that turkeys are endangered because some of you or a lot I say are going to eat one this thanksgiving.  Well, thats just about that, let's talk about he habitat and breeding!
They live in the american woodlands. Today they are mostly found in Hawaii, New Zealand and Europe.
Females lay 4-17 eggs and also after the chicks hatch the mom only feeds it  for a few days. The chick will quickly learn how to fend themselves as part of the flock. Males usually take care of the chicks. Males turkeys display their ruffled feathers, fanlike tail, head, and their red beard (known as gobble). Their gobble can make a sound that can be heard 1 mile away. One Interesting fact is that Benjamin Franklin declared turkey the national bird.
Ostrich are the best. They can't fly! These birds have long legs that sprint up to 43 miles per hour. Unlike other birds Ostrich have long legs that have two toes on each instead of 3. It is the largest and heaviest bird in the world!! Ostrich have big eyelashes, almost as big as the Camels. It is interesting  , the females lay their eggs, they are white in color & they weigh up to a dozen chicken eggs and are HUGE!!! THEY live up to forty years. Ostrich eat lizards and insects and more. Their predators are Lions, Lepord's, and Hyenas. The predators have to be careful because one whack of the Ostrich's leg they will get hurt. People think that Ostrich bury their head in the sand but they are actually trying to become less visible. It is interesting that they can roar like a lion. See you next time! 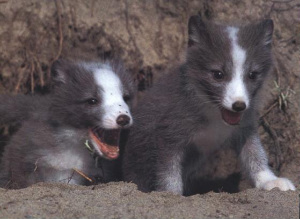 Baby Arctic Cubs!
We can find Arctic Foxes in these places: Tundra, Alaska, Iceland , Canada, Arctic and more. They are in the family of Canidae! Arctic Foxes have thick fur so they can survive in the harsh cold winter! Arctic Foxes have padding on their paws which helps them not slip on ice and snow! They use their tail while sleeping, to curl around their body (to keep warmth). They live up to 3 to 4 years! They eat anything including polar bear leftovers. Their favorite is Arctic Lemmings! But they do eat some berries if they can't catch an animal! Mating season starts in early September and ends in early May. They give birth to 5-9 pups! Male and Female take care of them until they are able to hunt for themselves.
One cool fact is that Arctic Foxes are brown in the summer and white in the winter! See you next month!
Animal of the Month! What will it be? A reptile? A bird? It is the bird of paradise! They're colors are bright, yellow, blue, scarlet, green and red. They are in the family of Paradisaeidae! Males impress females with their streamers or head fans. Birds of paradise mostly live in New Guinea. They live in tropical areas where it doesn't snow and is humid. These are fun amazing animals. There are 39 species of birds of paradise. Three are, Peacock, Toucan, and Parrots. Did you know that!? These birds can display dances for hours! These birds are so attractive that they were once target for skin hunters. I might not go and see these birds but you at least try to go or you can go www.birdsofwonder.com!