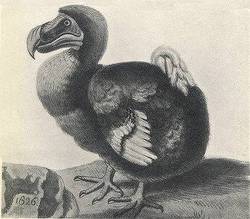 DODO BIRD
Extinct Animals! Extinct means it doesn't exist anymore. In other words the species is DEAD! Scientists have come to this conclusion through fossils and mathematical formula's. If an animal is not sighted for more than 50 years, then they will be considered as an extinct animal. You know sometimes extinct animals are found to be alive too. Some scientists have found bones in Abu Dhabi and took DNA samples and found out the bone belongs to some extinct monkey, but they are still researching. Paleontologists have found dinosaurs bones in sedimentary rocks, as well. They also have geological maps to locate the rocks so that they can hunt for them. Some Animals like Dinosaurs, Mammoths, and Saber-Tooth Tigers are all history, but were alive before. Some Extinct Animals are Dodo Birds, Himalayan Quail, California Golden Bear, Woolly Mammoth, and much more. This is not good. It is such a loss not to see these animals.